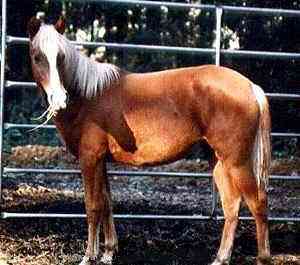 A mustang is a small, hardy, naturalized (feral) horse of the North American west.

Because of their hardiness, grace, speed, and independence, the name “Mustang” is popular for high-performance products and for sports mascots.

The English word mustang comes from the Mexican Spanish word mestengo, itself derived from the Spanish mesteño, meaning cattle raised under the extensive system of the Mesta and strayed.
Origin: United States.

Conformation: Mustangs will often have a Spanish type head with a Roman nose; they are usually short through the neck, somewhat upright in the shoulder, flat through the withers, have a short back, and poorly conformed, but very tough legs.