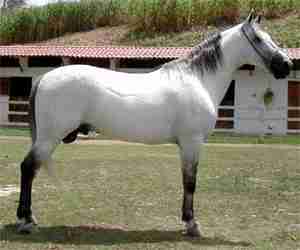 In 1812 Prince Pedro I presented a young stallion named SUBLIME to his friend, Gabriel Francisco Junqueira, Baron of Aldenas and owner of the Hacienda Campo Alegre near Belo Horizonte, in Minas Gerais, Brazil.

SUBLIME was bred to native mares of Spanish Jennet and Barb blood, many of which were fast amblers. The get of these breedings were called “Sublime horses.”

Later, the Hacienda Mangalarga acquired stock from Campo Alegre and awakened interest in the horse among local ranchers. They quickly saw the advantages of the smooth, cadenced, and rhythmic gait, the “marcha”, and the horses were soon known as “Mangalarga Marchadors.”