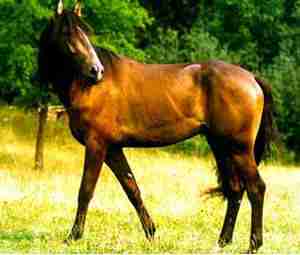 This close relative of the Andalusian is best known as the mount of Portuguese bullfighters, although it originated as a cavalry horse.

It is agile and very amenable to training.

Colour: usually grey, but any solid colour is acceptable.

The Lusitano horse is the indigenous hot-blooded horse of Portugal. It has been ridden for over 5000 years, and is certainly one of the oldest saddle horses in Western Europe.

The breed is rare and precious, there being less than 5000 productive purebred mares worldwide. However, the Lusitano is growing in popularity as more and more people come to appreciate the characteristics of this outstanding horse.

One area of Portugal has been breeding Lusitanos for over 250 years and is the source of the Alter Real Bloodline. To view information about Peak Lusitanos please click here

The Lusitano is a noble looking horse, with convex head, short coupled body, excellent dense bone with his legs positioned well underneath him and an abundance of mane and tail. Height ranges from 15.1hh to 16hh although horses exceeding this height range are not uncommon these days.

One of their most important attributes , if not the most important, is their gentle affectionate nature for which they are renowned.

This attribute alone makes them fantastic horses to be around and although much is made about (quite rightly) their affinity to dressage/ high school work, they also make wonderful family riding horses. Rosita, my Lusitano riding mare is ridden by myself and 10 y.o daughter. We do a bit of everything with her, jumping, dressage, fun rides, showing etc. She is a pleasure to take out,

HISTORY OF THE ALTER REAL LUSITANOS
The Alentejo is the hottest, driest region of inland Portugal. Without the rivers and streams that exist within this province, it would be a desert. Hot in summer, lush in spring and enduring subzero temperatures in winter, it is one of the least polluted areas in Europe. The Alentejo is a very important region for horse breeding.

The stud owes its existence to King Joao V (Duke of Braganza) whose dream created a stud equal to the best of all the European Royal Studs. A key influence was his wife Maria Ana of Austria, who was an enthusiastic devotee of the Spanish Riding School of Vienna. Equally influential was his son Jose, a keen exponent of classical equitation and who had always aspired to breeding top quality Royal mares. At this time throughout Europe the breeding of high bred horses was being actively encouraged and the purpose of this royal stud was to supply the Portuguese Court and Royal Manage with suitable Haute Ecole and carriage horses.

Alter do Chao (on the estate of Coutada do Arneiro dos Duques) was inevitably chosen in 1748 as horses from this area were considered the finest in Portugal. It is an idyllic location for the breeding of horses; the grazing particularly suited to a very fine line of horse.

Around 40 of the best mares were imported from Andalusia which made up the foundation herd, but over the years Colonel Bartolomew Aranda selected more than 150 Andalusian mares to be bought to Portugal. The choice was influenced by the superb qualities these horses displayed in the Haute Ecole. Spanish and Portuguese stallions covered these mares. The resulting colts were then bought to Portuguese mares.

It was at Alter that the 4th Marquis of Marialva oversaw the selective breeding and laid down the principles of the Haute Ecole.The Couldelaria de Alter is currently a state stud under the Ministry of Agriculture.

It is the oldest stud in Portugal but has not escaped times of decline. The Napoleonic Invasions and Peninsular war resulted in a huge loss of equine lives.

At the beginning of the 19th Century, the bloodlines weaken owing to poor breeding criteria. There was also a period of unfavourable crossbreeding, particularly with Arabs. Only when new Andalusian blood was reintroduced at the end of the 19th Century was there any real improvement.

Portugal ousted her monarchy at the beginning of the 20th Century. Nearly all the records at Alter were destroyed. The government made a decision to close the stud and the stallions were taken away to be gelded. Disaster was avoided due to the eminent Portuguese horse expert, Dr Ruy de Andrade, who bought two of the stallions and a few mares at auction. This was enough to ultimately allow a recovery of the breed. In 1942 he presented to the Ministry of Agriculture a small stud of the original line.

The Alter horses are a well defined breed nearly always bay, standing between 15-16 h.h, strong, powerful and exhibit a high stepping action. They are most noble, thoroughbred and are excellent saddle horses.

This quote says it all about the aristocratic Alter Real Lusitano horse.

1. Alter Real 1748- 1998 by Gemma van Dijk.
2. Alter Stud Brochure produced by the stud itself
3. Lusitano Horse: Son of the Wind by Arsenio Raposo Cordeiro.
4. The Royal Horse of Europe by Sylvia Loch

WHY CHOOSE A LUSITANO?
The Lusitano originates from Portugal and is said to be the oldest saddle horse in the world. Their courage and agility made them the most successful war-horses of all time. Many of the movements used in combat on horseback are those now refined into more precise movements we know today as dressage. The great empathy that exists between the Lusitano’s and their riders, coupled with their natural collection, agility and ability for gymnastic movements makes them the ultimate classical dressage/riding horse as well as accomplished sports horses. They are currently excelling in the fields of showjumping, endurance, eventing, side saddle and driving.