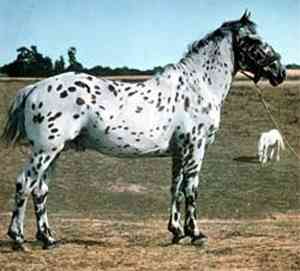 Noted for its spots, the Appaloosa was originally bred by the Nez Percé Indians, and is now one of America’s foremost breeds and is found in many countries round the world. Arab blood was introduced in the late 19th century.

The breed has six distinct patterns of spots, but now two horses are exactly the same. Leopard horses are white with dark spots; Snowflake is dark with white spots.

Spotted Blanket colouring is mainly dark with dark spots on white hindquarters or back and White Blanket is the reverse. The Marble horse has a dark coat at birth that fades almost to white, and the Frost Tip is mostly dark with light spots on loins and hips.

Colour: Six patterns of spots, usually on white or roan.