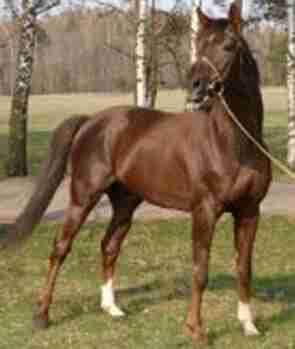 The Trakehner was developed in the 18th century in what was East Prussia (Poland) from the Schwieken horse.

Following the end of World War II, less than a thousand of these horse trekked west with refugees escaping the Russian invasion.

These horses re-established the breed in Germany.

It has been said that the Trakehner has everything everybody is looking for in a performance horse and if you look at the breed’s list of attributes it is easy to see why.

The Trakehner is the most important and outstanding of all warmblood breeds, renowned for their grace, power, magnificent movement, outstanding beauty, great ability to perform, they are naturally balanced and free.

Best of all, they have an ideal temperament – keen and alert, yet level-headed and able to take intense work. They have a willingness to work and due to their intelligence they learn extremely quickly. The Trakehner, is the warmblood closest to the British ideal of the modern competition and riding horse, whose upgrading influence of bloodlines is evident in most of the continental sports horse breeds today. The popularity of this breed is growing at an outstanding rate.

HISTORY OF THE TRAKEHNER

The first Trakehners were imported into Great Britain in 1960 by the Muschamp Stud and since that time they have steadily gained in popularity and have won the hearts of many enthusiasts.

Today the Trakehner Breeders’ Fraternity (TBF) are the controlling body in the UK, licensed by the Trakehner Verband GmbH in Germany to register, grade and brand horses in the main stud book with the distinctive double Elk horn brand with the inverted ‘V’ beneath to denote “British Bred”.

The Trakehner is the “Thoroughbred” of warmblood breeds, it is more closely related to the Thoroughbred than other German breeds having had major influence in the stud book from the English Thoroughbred and to a lesser degree, the Arab and Anglo Arab. Due to selective breeding the Trakehner has retained the best Thoroughbred qualities while keeping its own special character and “type”. The “Lloyds Bank Black Horse” is a Black Trakehner Stallion’.

WHY CHOOSE A TRAKEHNER?
The Trakehner Stallion is one of the most valuable sires used to improve and upgrade stock from mares whose owners want to breed a competition horse (or just a wonderfully reliable friend) from their mare.

Whether the mare is of Thoroughbred origin or from a native breed, all have proved to cross extremely well with the Trakehner, bringing better movement, beauty and without fail, a good temperament to the offspring

HOW DOES THE TRAKEHNER PERFORM?
The record of Trakehners in competition is impressive.

Trakehners won every medal for the German Olympic Team in the 1936 Olympics in Berlin. In recent years horses such as Abdullah who carried Conrad Homefeld to win a team Gold and individual Silver medal for USA at the 1984 Olympics and Goldkorn by Istanbul winner of the Danish Show Jumping Derby 1989 under Hugo Simon.

Dressage
The famous dressage rider Reiner Klimke has ridden many Trakehners to Grand Prix level including the famous Fabian and Biotop. Olympic Dressage Trakehners include TCN Partout and Peron. The stallion Va Tout (standing in the UK) was the most successful dressage horse worldwide in 1985.

In the driving world, Karen Bassett and her team of black Trakehners became Britain’s National Champion and the worlds leading lady 4-in-hand driver in 1995.

Trakehners today are in the Olympic Teams for all disciplines – dressage, Show Jumping, eventing as well as winning Long Distance Riding and Driving events.

Trakehners are addictive, once you have had one, your hooked! They are just” very nice people”, so willing to please and a pleasure to own