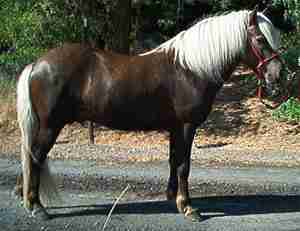 The Icelandic horse (and although they are pony height they are referred to as horses) all have tremendous stamina and strength.

They are surefooted and have unusual gaits – in addition to walk, trot, canter, there is tölt (a four-beat running walk) and pace (a two-beat, very fast, lateral gait).

Character: self-willed, but eager to work, with a good sense of direction.

All the horses found in Iceland today are descended from horses taken to Iceland by the Vikings. Their ancestors came from Northern Scandinavia and the British Isles, in particular, the Dole Horse of Norway and the Celtic Pony from Britain.

In 982 AD, the Icelandic Parliament passed a law which stopped the importation of horses to prevent the spread of disease and even today, any horse that leaves Iceland can never return.

The result of the law passed over a thousand years ago is that the Icelandic Horse is the purest bred horse in the world!

Icelandics were first brought to Britain to work in the coal mines, however, the horses were never registered and now little sign remains of them.

CHARACTERISTICS OF THE ICELANDIC HORSE
The Icelandic horse in competition

An Icelandic mother and foal

A stocky horse with a characteristic thick mane and tail, the Icelandic Horse is rarely more than 14.2hh, or less than 12hh.

He sports a deep chest, expressive head supported by a supple, well-set neck and strong limbs. His coat is fine and shiny, but in winter the horse grows a long, thick coat with three distinct layers.

Icelandics can be any colour, bay, brown, chestnut, skewbald, palomino or dun. However, there is one particularly sought-after colour – a silver dapple, where the horse is chocolate brown and the mane and tail are silvery white.

Riding an Icelandic horse can be exhilarating as he uses two additional gaits which give him the impression of courage and power. The first of the extra gaits used by the Icelandics is a fourth gait known as the ‘TÖLT’. This is a four beat running walk which can be performed at any speed and is extremely comfortable for the rider. Some of these unique horses also possess a fifth gait known as FLYING PACE, a two beat gait used for racing where he can achieve speeds of up to 30mph, however, this gait is very demanding on both horse and rider.

Icelandics should not be backed until they are 4 years old and are not considered mature until 7. However, they are still found working when they are 25 or 30 years old – The oldest one so far in Britain was 42!! These horses are very versatile and are bred to carry heavy riders aided by short-coupled legs with high bone density.

In Britain there are around 400 registered Icelandics and are particularly popular in Southern England and around Edinburgh in Scotland.

SOME INTERESTING FACTS ABOUT THE ICELANDIC HORSE
The Tolt – The Icelandics’ unique fourth gait
He has two extra gaits in addition to walk trot and canter. Tölt, a 4 beat lateral gait known as a running walk and Flying Pace, a two beat lateral gait used for racing

He’s the most pure-bred horse on the world – There has been no horses imported into Iceland for over a thousand years!

Although they are not tall – Icelandics ARE HORSES! They are the ultimate family friend and can be ridden by adults and will not be outgrown by the children!

Icelandics are forward-going yet feel very safe. This is because they go forwards, not up and down and sideways. With an Icelandic you have the ultimate in comfort and fun!

Icelandics are very versatile. As well as being excellent family horses, they are also used for driving, hunting, long distance, horse football, le TREC, dressage, gymkhana and riding for the disabled

Founded in 1986, the IHSGB exists to maintain the purity of the unique Icelandic horse, to promote interest in the breed and to encourage Icelandic riding competitions.

The British Society is a full member of FEIF, the International Federation of Icelandic Horse Associations, which has 19 members including Canada and the USA.

The IHSGB publishes regular newsletters with information about Icelandics at home and abroad. There is a video library, and various IHSGB items may be purchased including sweatshirts, car-stickers, spare-wheel covers etc. National Championships are held every two years to coincide with the World Championships for Icelandic Horses to which Britain usually sends a team to compete.

The IHSGB is split into four regions, and numerous regional meetings, training courses, pleasure rides, competitions and social events are held. Junior members have their own events and can take part in several international events organised by FEIF.

There are at present around 150 ISHGB members, with around 400 registered horses, all of which can trace their ancestry back to Iceland. More horses are imported every year and breeding is continuing in some areas. There are several promising stallions in Great Britain, and AI is now another possibility for mare owners. In addition, stallions have been hired or borrowed from studs in Europe, and mares have been taken to stallions in the Netherlands and Denmark.

IHSGB members are a very friendly group, and anyone with an interest in the unique Viking horse of Iceland is warmly welcomed.