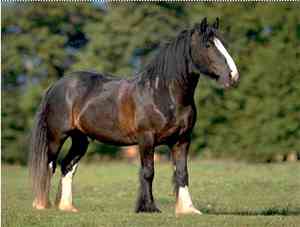 Scotland’s own heavy horse, bred originally in Lanarkshire, developed more recently than other British heavy breeds during the second half of the 18th C.

Imported Flemish stallions were used on local mares and Shire blood was also used. The first stud book was published in 1878.

It’s docile nature, strength and soundness led to it being widely exported and there are very active breed societies in Australia and North America.

The Clydesdale Horse Society was established in 1877, almost a century and a half after the breed first began to evolve. The primary purpose of the breed was literally as a farm work horse – true horse power prior to mechanisation.

From the early days the reputation of the horse grew considerably and the horse fairs held over several days in the Lanarkshire area attracted buyers from far and wide looking for draught horses to fulfill a variety of roles in the haulage field.

The major cities of Scotland and the North of England and Northern Ireland .probably housed as many Clydesdales as the agricultural areas did – Clydesdales were used for both short and long distance haulage and delivery everywhere. A considerable export trade also developed to the expanding North Americas and the Commonwealth.

HISTORY OF THE CLYDESDALE
Early drawings of Clydesdales show a chunky, solid coloured horse, short and close coupled and by the time photography came in, early examples were also mainly dark coloured horses with four dark legs, still short coupled and very powerful. Gradually white legs became fashionable and the breed as you see it now became more clearly defined. The vast majority of Clydesdales are solid coloured bay or brown with four white legs, the long, silky feathering around the feet being a distinct feature, with soft, not coarse hair. As the white colouring was introduced for the legs, in some instances this ‘spread’ and resulted in a roan animal, which for a time was frowned upon by the purists. However nowadays these animals have a much wider acceptance and indeed the main female prizewinner in 1997 at the Royal Highland Show was a roan mare.

As with all heavy horses the Clydesdale Breed hit a low point in the sixties and seventies. The breed was kept alive by a number of stalwart families as much through sentiment as anything else and happily now numbers have increased to a fairly healthy level once more, although the breed is still classified as ‘At Risk’ by the Rare Breeds Society.

New breeders are taking up this expensive ‘hobby’, helping to expand numbers. In 1999 114 Filly Foals were registered along with some 90 colt foals.

In all likelihood however there were probably a good number more colt foals born than were registered, as the main purpose of our Stud Book is for breeding animals and as most people will castrate colt foals they do not bother to pay the registration fee. 16 stallions were registered, stallions having to be so registered prior to them turning 3 years of age. Stallions and filly foals are parentage tested to verify their pedigrees.

Beautiful Clydesdale foals
WHY ARE CLYDESDALES POPULAR?
A Clydesdale wedding! The majority of Clydesdales kept at present are used for breeding and showing.

Those who are keen on driving for educational or promotional purposes are increasing in number and they usually use geldings. In these more eco friendly and aware times, horses are being used again in environmentally sensitive areas for extracting timber or for carrying out haulage work.

Some horses too are also used in the ‘Wedding Industry’ for conveying brides to church – it looks ever so good in the photographs!

The Society itself is headed by a President, Vice President, Honorary Treasurer and Immediate Past President. The main decision making forum is the Council of the Society which comprises 3 members from each of the 14 ‘Areas’ throughout Scotland, England and Ireland. There are 3 Honorary Presidents. There is a membership of around 700.

“More and more people are now enjoying riding Clydesdales…far from being slouches they are very forward going with a lovely flowing action. A minister of the church on a Scottish peninsula rides a Clydesdale around his parish, others compete in riding club activities, many draw admiring looks as they simply hack out and others take on all comers in the endurance sphere”